Debate on the authority of Vatican II 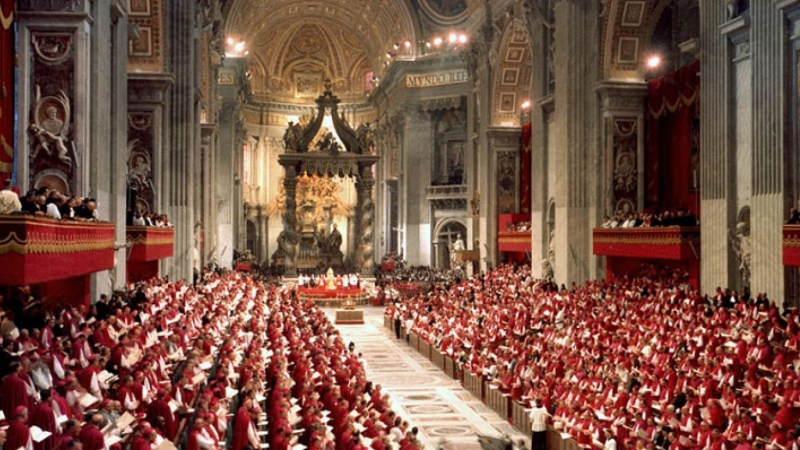 Last month, we spoke about the ban on communion on the tongue, authoritatively imposed by several local bishops, including His Eminence Thomas Cardinal Collins, the Ordinary of Toronto, as a “sanitary measure”, supposed to prevent the spreading of the Covid-19.

Beyond the lack of a unanimous consent of the medical world about the “risk” of spreading the disease by means of communion on the tongue, our main concern is the Faith in the Real Presence, which is seriously undermined by the practice of communion in the hand.

Thus, it is for doctrinal reasons that we refuse to follow this directive from the Archdiocese of Toronto, and that we stick to the traditional practice of communion on the tongue.

Communion in the hand is one of the most visible signs of the radical changes introduced in the liturgy of the Roman Rite after the Council Vatican II (1962-1965).

But was not the Council Vatican II against these radical changes? Conservative people often quote the document of Vatican II on the liturgy which says: “Particular law remaining in force, the use of the Latin language is to be preserved in the Latin rites.”[1]

But Archbishop Lefebvre answered those who claim that the ‘true’ Council Vatican II was clearly in favour of the traditional liturgy and particularly for the use of Latin language.  “During the Council, we were told that Latin must be kept in the liturgy, but this was a lure.  As a matter of fact, all the changes introduced in the liturgy in the years that followed the Council, including the abandon of Latin, were all done in the name of Vatican II.”[2]

Therefore, the debate on the communion in the hand is leading us to another debate, the one of the Council Vatican II.  Could we follow the thesis of those who make a distinction between the “true Council” which, according to them, was genuinely in line with tradition, and the “Council of the media” which was, according to the same people, highjacked by liberals and modernists?

For many years, a true and honest debate about the Council Vatican II was absolutely forbidden within the mainstream Church, but the studies of the late Msgr. Bruno Gherardini, and the courageous stand of Bishop Athanasius Schneider and of Archbishop Carlo Maria Viganò start to make it possible.

In fine, following Archbishop Lefebvre, the founder of the Society of St. Pius X, we can say that "Without rejecting this Council wholesale, I think that it is the greatest disaster of this century and of all the past centuries, since the founding of the Church."

The reader will find a selection of articles published recently on that topic.  Our wish is that public debate will lead more souls to understand the stand of the Society of St. Pius X about the Council Vatican II and its reforms, particularly the New Mass.

[2] Free quote from a Spiritual Conference given to the seminarians of Ecône, around 1979