A Veil on the Crucifix 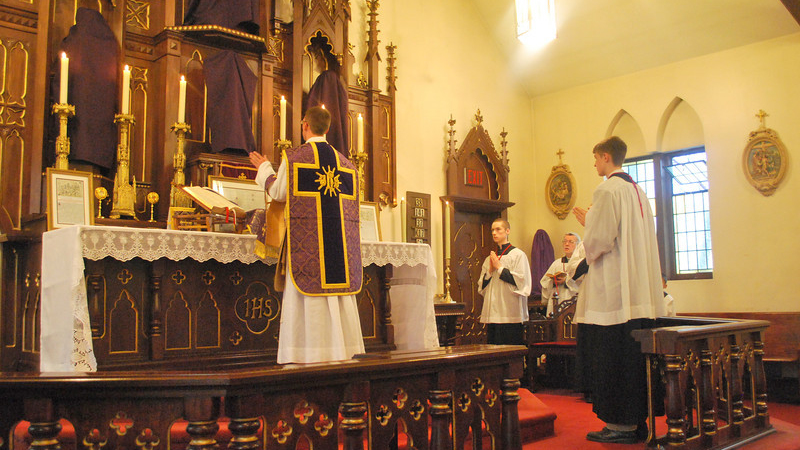 Since March 17, when the Province of Ontario declared the state of emergency on account of the covid-19 epidemics, the priests of the SSPX have been quite busy, staying on the battlefield for souls. For sure, this situation was not something new to them, because they are thoroughly dedicated to their vocation for the glory of God and the salvation of souls, but things have been very intense over the past days.

At the same time, the priests of the SSPX were careful to comply with the requirements of March 17 declaration of state of emergency in Ontario. While Cardinal Collins quickly decided to cancel all public Mass in the Archdiocese of Toronto, the priests of the Society of St. Pius X decided to keep their church from Etobicoke, the Church of Transfiguration, open for public Mass as long as civil authorities would allow it.

We organised ourselves to comply with the rule of 50 persons max and the social distancing requirement. Faithful had to register for Mass and we set up clear marking on the pews to keep social distancing while attending Mass. Word of mouth spread quickly within the Catholic community in Toronto that we were still having Mass in our church, and we received hundreds of calls from faithful that we didn’t know, but who were eager to come to the Traditional Latin Mass and to receive the sacraments.

Our dedicated priests and lay staff were overwhelmed, and they tried to manage the best they could with this new situation. A number of souls approached our priests to get reconciled with God by making a good confession, and this was a real blessing in the midst of the present-day calamity. Moreover, this was a great consolation for our priests who answered the call of God to dedicate themselves for the salvation of souls.

On Sunday March 22, our Mass was broadcasted for the first time on YouTube, as the only Catholic Mass still accessible to a limited public in Toronto.

But, with the Ontario government order of March 24, which gave the list of the “essential business” that are still allowed to stay opened during the covid-19 crisis, we start to wonder if it would also apply to churches.

After the morning Mass, on March 25, an officer from the Toronto Bylaw licensing enforcement department came to deliver a “notice of non-compliance with Provincial Emergency Order 520-2020”. The officer was nice and polite but said that he was just doing his job and following orders received.

After that, we called the newly established toll-free number from the Ontario government, to find out from an authorized government agent if churches were to be considered as “essential businesses” that are allowed to stay open according to the March 24 government order. But the man who answer us couldn’t give a straight answer. He told us that our request will go up to the next level, which will forward it to the ministry that will answer hopefully by next week.

Now, it looks like the celebration of the mysteries of the Passion may have to be celebrated without the assistance of the faithful. The purple cover on the statues and crucifix will have a special meaning this year, because it will also veil the ceremonies that Catholics from all over the world may not be able to attend. But let us not forget that the Resurrection always follows the Passion.

Meanwhile, in the midst of the great metropolis of Toronto, there is a little church that keeps the beautiful ceremonies of the Traditional Latin Rite in all their splendor, even though it may be behind closed doors, but Catholics will be able to follow on YouTube.